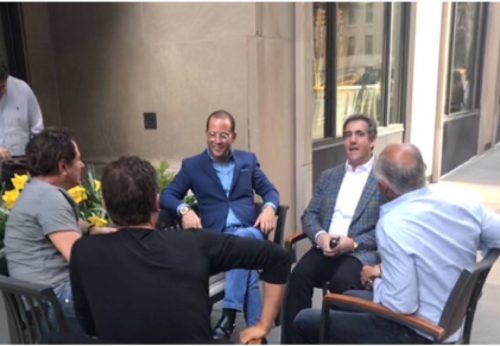 Michael Cohen and his cronies. Photo by Alison Greene.

WHILE I HAVE long grouped Michael Cohen with Paul Manafort, Mike Flynn, Jared Kushner, Jeff Sessions and Donald Trump père et fils as the “Seditious Seven” with regard to Trump/Russia, I have heretofore operated under the assumption that Cohen was subordinate to Trump. After all, he is routinely described as “Donald Trump’s personal attorney” and portrayed in the press as a loyal henchmen of the kind found in the company of the Joker on the old Batman show.

But what if I have it all wrong? What if Michael Cohen is not Trump’s fixer, but rather his handler—his personal liaison to the Russian mob? What if Cohen outranks Trump on the org chart?

We know Cohen had “mob ties” from a fairly young age. Felix Sater is his childhood chum. Whatever color Sater’s hat ultimately turns out to be—he’s been an FBI informant long enough that he may wind up being one of the good guys—his father was very much affiliated with the Russian mob. If Sater and Cohen were childhood friends, it follows that Cohen knew Sater’s old man. Too, Cohen’s father-in-law also has questionable ties to organized crime (“OC”). Oh, and Cohen has himself boasted that he works for the Russian mob. Which seems kind of relevant.

We know that Cohen went to literally the worst law school in the United States…you know, like a mobster would. We know he doesn’t actually practice that much law. His revenue comes from other business interests: real estate, taxi medallions, fine art, hush-money payouts, insurance scams, and getting nosy people to lay off Mr. Trump. These are activities that mobsters engage in, because most of them are ideal avenues to launder dirty money. Which is why mobsters have their offices and homes and hotel suites raided by the FBI.

Cohen is a major figure in the Steele dossier. Of Americans, only Carter Page is mentioned more. But if we go through the known meetings between Russians and Trump campaign members, Cohen only pops up twice. In late August of 2016, he meets in Prague (or some other European city) with unnamed Russians. In December of that same year, he and his old friend Sater meet in New York with Andrii V. Artemenko, a pro-Putin Ukrainian politician, to negotiate sanctions; Cohen delivers their proposal by hand to then-incoming-NatSec Adviser Mike Flynn. Perhaps Cohen and Sater were not there to negotiate, but rather to receive marching orders from Semion Mogilevich via Artemenko to pass along to Trump via Flynn.

We know there are really weird financial dealings on Cohen’s books: the Stormy Daniels payout, which money he says he procured by taking out a HELOC; the $1.4 million payout to the knocked-up Playboy model; the not-yet-explained dealings with Sean Hannity.

We know that Mueller outsourced the Cohen raid to the Southern District of New York—a district with familiarity prosecuting mob operations.

We know that his daughter was so unfazed by the FBI raid that this was her first Instagram post after it went down: 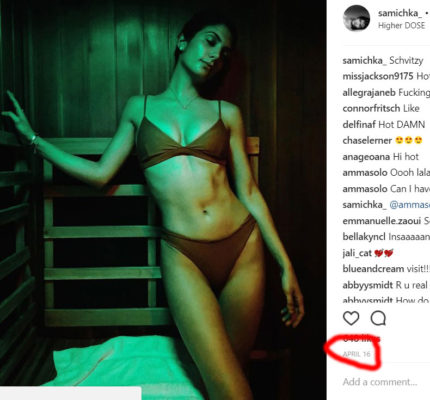 Subtext: it takes a sauna to make a Cohen sweat.

We know that during the campaign, Cohen sounded like a mobster when he declared, of the polls showing Trump losing, “Says who?” He may well have followed that with, “That’s some nice polling data. Shame if anything were to happen to it.”

We know that there was a fire in apartment 50C at Trump Tower—an apartment owned by a destitute former art dealer, one of very few four-alarm fires in a New York hi-rise. We know the fire started in the adjacent apartment, which was vacant. We know that a lot of priceless art went up in flames…unless it didn’t. We also know that Cohen, who was not in the building at the time, warned a friend who was to get out of Trump Tower because of a fire; the man said there was no smoke and no alarms when this message was received. How did Cohen know about the fire before people in the building did?

Alison Greene, who witnessed and photographed Cohen and his cronies after the professional journalists left, suggests that the cigar photos were staged—and for a sinister purpose. The cast of characters surrounding Cohen and his $3,000 sport jacket all seem to have Russian OC ties, notably Rotem Rosen.

“Is Putin’s crew sending a message that they own Cohen?” she writes. “And does Cohen not care about being in the court because Russia’s going to protect him? Is Cohen showing his allegiance & has Russia promised him he’s safe? Or is Putin’s crew testing Cohen’s loyalty w/ the public display?”

Greene may be on to something here.

In Russia, organized crime is fully integrated with the intelligence services, with the oligarchs, and with the actual government. The two most powerful people in Russia are Vladimir Putin (the richest oligarch, the head of the IC, and the president) and Semion “The Brainy Don” Mogilevich, the capo di tutti capi of the Russian mob. They are like the Emperor and the Patriarch in the Byzantine Empire, or Paul Ryan and Mitch McConnell in Congress. They work together intimately and run the country like the mobsters they are. When we say Cohen works for the Russian mob, then, what we mean is that he also works for Putin.

Russia is run by its oligarchs, its intelligence services, and its mob. They work in tandem, or rather in troika, but they are not a monolith. Perhaps each tentacle of the operation has both Russian and American intermediaries. To wit:

Again, I’ve long assumed that Manafort and Flynn are the key figures here, with the likes of Kushner and Junior being led astray as the campaign went along. Perhaps Michael Cohen is more than just an enabler.

Greg Olear (@gregolear) is a founding editor of The Weeklings and the author of the novels Totally Killer and Fathermucker, an L.A. Times bestseller.
View all posts by Greg Olear →
This entry was posted in Trump/Russia and tagged cigar meeting, Donald Trump, Michael Cohen, Natalia Veselnitskaya, Putin, Rotem Rosen, Russian mob, Trump Russia. Bookmark the permalink.