Dirty Rubles: An Introduction to Trump/Russia (My New Book) | The Weeklings

Dirty Rubles: An Introduction to Trump/Russia (My New Book)

I have written a short book called Dirty Rubles: An Introduction to Trump/Russia. It is available in print, and as an e-book. 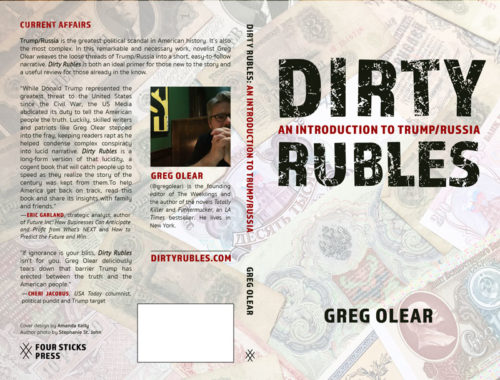 It is a 120-page Trump/Russia primer, similar in tone to my summary threads on Twitter, and drawn extensively from my work here at The Weeklings. I hope that it will be a useful resource in broadcasting the truth about Donald Trump.

Writing a book about Trump/Russia is like jumping off a moving train. Trump is a locomotive, hurtling down the tracks, spewing filth a mile a minute. Instinctively we try and keep up. But it’s necessary sometimes to stop, look around, and take stock of the situation.

Dirty Rubles is my attempt to do just that. It is a short book that presents an OVERVIEW of Trump/Russia. Nothing fancy. Nothing complicated. Just a primer. Because we need a primer. Because if the fate of the nation hinges on whether, say, my parents can tell the difference between Sergei Lavrov and Sergei Gorkov, we are all doomed.

It is designed for people who have not been following the story closely, so they can be brought up to speed. But Dirty Rubles is also a handy review, for those of us who HAVE had the misfortune of following the Trump/Russia saga. (It’s also a great gift for the MAGA devotee in your life, who will need an overview when they realize their Emperor is buck-naked & hung like a gerbil).

Here’s a closer look at the table of contents:

1/ Introduction
In which I present my bona fides, such as they are, and explain the purpose of the #DirtyRubles book. We reflect on the impossibly long odds of a Trump victory. Listen to me read it, here.

2/ The Russia Lie
We discuss Trump’s use of the “Big Lie” strategy so eloquently explained by Hitler in Mein Kompf. We present a litany of his lies about Russia. We discuss the 7 most important Trump/Russia meetings. #DirtyRubles

3/ Conspiracy Against the United States: A Plot Summary
What is “Trump/Russia”? We quickly break down the crime, the criminals & their motives. We finger the troika of most important villains of the story: Paul Manafort, Mike Flynn & Jared Kushner. #DirtyRubles

4/ Boy Wonder Meets the Count: The Turning of Jared Kushner
In which I put on my novelist hat and tell the story from Jared Kushner’s POV. How he went from young, wealthy New York royalty to Kremlin asset. #DirtyRubles

5/ Sexts, Lies & Videotape: October Surprises
How in God’s name did the Access Hollywood tape not end Trump’s presidency? Because of the Comey letter. Why did Comey do such a thing? We explain. #DirtyRubles

6/ Thieves-in-Law: The Brainy Don vs. the Not-so-Brainy Don
This is a chapter about the Russian mob, which is more like SPECTRE than Goodfellas. These are NOT people we want to cozy up to. We also delve into Trump’s mob ties. #DirtyRubles

7/ Trick or Treat: The Fourth Estate Craps the Bed
The MSM failed bigly, especially the NYT on 31 Oct 2016. We discuss this failure, its causes and consequences. We talk Steele. We laud brave journalist heroes like @NatashaBertrand, @DavidCorn, @20Committee & @LouiseMensch. #DirtyRubles

8/ Lame Ducks & Pink Slips: #ObamaFail and #ComeyFail
We all now love Comey and have imbued Obama w/almost mythological goodness. But we have to be true: both of these great men f8cked up royally. Bonus: our election take. #DirtyRubles

9/ Witch Hunt: Collaborators Gonna Collaborate
Trump has tweeted that phrase over THREE DOZEN times. We name his collaborators in his administration, in Congress, in the media. We finger the @GOP, @SpeakerRyan & @DevinNunes. #DirtyRubles

10/ Known Unknowns: What’s Next in Trump/Russia
How to end such a book in May of 2018? We rattle off the things we know that we’ll eventually know (i.e., Junior’s indictment, Mike Pence’s role, results of Midterms). We end with hope! #DirtyRubles

I hope that you will buy and read #DirtyRubles, and more importantly, share it.

Thank you, as always, for your generous support.

Greg Olear (@gregolear) is a founding editor of The Weeklings and the author of the novels Totally Killer and Fathermucker, an L.A. Times bestseller.
View all posts by Greg Olear →
This entry was posted in Trump/Russia and tagged dirty rubles, DirtyRubles, Putin, Trump, Trump Russia. Bookmark the permalink.

3 Responses to Dirty Rubles: An Introduction to Trump/Russia (My New Book)