Gunned Down in Chicago: An Eyewitness Report | The Weeklings

Gunned Down in Chicago: An Eyewitness Report

AROUND 4: 30AM ON SUNDAY MORNING, AUGUST 20TH, I watched a man bleed to death on the sidewalk directly outside my living room window.

I didn’t see the actual shooting, only heard it. About twenty shots, loud like firecrackers set off in a metal drum. I will confess the tumult did not immediately get me out of bed. Since moving to Roger’s Park on Chicago’s north side in April, I’d grown accustomed to the frequent burst of gunfire. What got me up were the screams that followed. A woman desperately yelling for an ambulance. A man shouting to keep pressure on the wound.

I got up and dialed 9-1-1. As I looked outside, I saw a man splayed on the concrete, a woman in tears clutching at his throat to stem the flow of blood, neighbors pouring out into the street. The police arrived within five minutes, the paramedics within five after that. By the time they took the victim away his eyes were rolling to the back of his head. He wasn’t moving. He was barely breathing. I’ll never forget the ashen look on his face.

This isn’t the first time I’ve been witness to gun violence in Chicago. It’s not even the first time someone was shot directly in front of my home. Sadly, I think, that’s true for many of us living in the third largest city in America. Daily trauma has turned routine.

Chicago’s gun violence has been in the news a lot again lately since the horrific mass shooting in Las Vegas that left nearly 60 people dead and over 500 injured. Ironically, it’s gun violence elsewhere that puts Chicago’s problems back in the spotlight.

Chicago comes up not by gun control advocates, but rather by those who counsel non-action. Sarah Huckabee Sanders, the chief propagandist for the Trump administration, cited Chicago in a press briefing following the tragedy in Las Vegas as proof that gun control legislation is ineffective.

“I think one of the things we don’t want to do is try to create laws that won’t stop these types of things from happening,” Sanders said. “I think if you look to Chicago where you had over 4,000 victims of gun-related crimes last year they have the strictest gun laws in the country. That certainly hasn’t helped there.”

In other words: the government shouldn’t do anything about guns because gun laws don’t work in Chicago. Imagine the cynicism needed to make such a statement.

Sanders was lying, of course. Chicago does not have the strictest gun laws in the country. Several places, including California, have more stringent regulations. Many of Chicago’s tougher provisions, including a county-wide handgun ban, were deemed unconstitutional by the Supreme Court in 2008. And there is evidence that without Chicago’s remaining gun regulations the violence would actually be worse. But Chicago’s gun problem has virtually nothing to do with the law, at least not local law.

The man shot outside my window, whose name I later learned was Remus Campbell, died in the hospital. One of dozens of shooting victims that weekend. One of hundreds shot in August alone.

The mayhem in Chicago has become so ubiquitous that it barely registers except when used as a political bludgeon. Local officials have their hands tied by federal law while the GOP-controlled government uses the violence as an excuse to do nothing except attack the Democrats. Donald Trump, who brought up Chicago often on the campaign trail and even threatened to “send in the feds,” has done nothing. They all do nothing and even use the violence as justification of their inaction, as Sanders argued following Las Vegas.

Chicago’s daily carnage represents the greatest political failure of our time. Everyone knows the reasons – drugs, gangs, poverty, racial inequality, and above all easy access to guns – and yet nothing is being done. No new bills have come through. No debate started. Not even a federal study to probe the problem.

Our political leaders do nothing because it’s most convenient for them to do nothing. They want chaos in the streets to keep our attention off the selling of America to the super rich. Let the mob wage war, while the Republicans quietly remove the estate tax and promote the rise of a new landed gentry. Let the poor kill each other, while the wealthy build safe spaces behind marble walls.

What is Congress debating this week? Tax cuts of course. 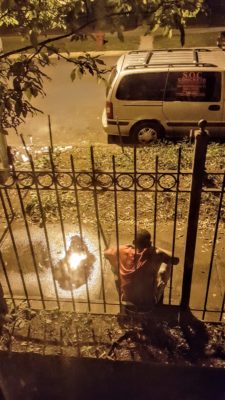